To teach players how to implement courage, tenacity, perseverance, and resilience to achieve excellence. To give our players unforgettable experiences that teach them the life skills necessary for success.

A like-minded community of athletes who strive for excellence both on and off the court.  A community where players compete at the USAV Open Level.

Respect All, Fear None 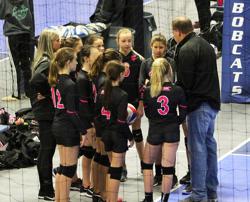 East Coast Volleyball Club (ECVC) believe it or not, had its beginnings back in 2008 when a group of friends decided they wanted to start their own club so they could all play together.  At the time, Valerie "Miss Val" Kallam was team mom at Princess Anne High School and since part of that group of friends included her daughter Lindsay, 2 others from PA and Lindsay's best friend, Elena who played for Kempsville, how could she refuse when they proposed the idea to her?!?

The early years were a lot of fun as it was a 1 team club designed to give a group of athletes the opportunity to finally play on the same travel team in a family style regional club where their input was heard regarding where they would play.  After Lindsay and the original group graduated high school, ECVC continued for a couple of years until Miss Val decided it was time to become inactive.

Valerie was and still is the team mom for PA Girls Volleyball and for the past couple of years, Coach Dooren asked what would it take to bring ECVC back..... 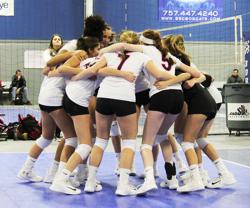 Well, in 2016 he again asked and with the help of many friends/investors, Coach Dooren, Miss Val, and Coaches Russell & Tracey Thompson brought East Coast Volleyball back to life!  ECVC had 2 teams in 2016/2017 season and once again, people were asking what is ECVC - where are you from!

Still holding to the roots of family, ECVC's current dream is to bring the best players together to give our athletes the ability to play competitive volleyball at the NATIONAL level with aspirations to attend the USAV National Championships.  We aspire to teach young girls the sport of volleyball and give them the opportunity to not only grow in the sport but to grow into young women who will one day make a positive difference in our world.

We currently have a home for our athletes with a 1 court facility where all practices are held.  It may only be 1 court, but it is OURS!  ECVC hopes to grow in the near future as we dedicate our mission to empowering young women to believe in themselves and reach for all they desire.

In just a year,  ECVC had grown to 7 teams and  Coach Russell asked Miss Val "Did you ever think  when you started ECVC  it would one day be this?"  I did not!  What started as a 1 team club for friends to play together, ECVC was now a 9 team club. In the 2018-2019 season ECVC had a total of 9 teams, including our 18 Boys team. The current season, 2019-2020, ECVC  has 8 elite girls teams.  ECVC is always looking to recruit the best of the best in the area  seeking the ultimate goal of a National Championship.

Get In Touch With ECVC

All-Pro equipment bags are designed and constructed with the same tactical technology that our nation’s heroes depend on to carry their mission-critical equipment in the harshest conditions on earth.

Our goal is to make the preparation process as easy as possible for you and minimize your tax liability with careful planning.